Has anyone set off the metal detector at the airport?

One of the questions that I asked before choosing clipping was if I would set off the metal detector at the airport. I was told, "of course not." Ok, good. So why is it that I got an envelope from the hospital with a Medical Alert ID card that I am now supposed to carry with me at all times that states, "The carrier of this card has one or more neurosurgical implants in their brain. The implants contain alloy which may be sensitive to airport security systems or metal detectors."

Have you set off the metal detector because of your clip(s)?

Thats interesting! No, I've no such card and no, i''ve never triggered any alarms at airports or courthouses or anywhere for that matter....

I honestly think having a card to carry with any of us who've undergone coils, clippings, peds, ETC., should have a card to carry around in their wallet (not because of terrorism mind you) , stating the exact make, type of product, etc., that we've got implanted in our heads...for MRI purposes down the line for instance, or any other medical situation we may find ourselves in...Does your new card tell what type/brand clips you have at least?

Yes. It is the Yasargil Aneurysm clips. On the back of the card it has my name, surgeons name, hospital name, my hospital ID#, date of surgery, surgery performed and implant numbers.

This is a serious matter. My wife was blasted by a antitheft device as she was walking into a major department store as another customer was walking out with a active antitheft tag. The tag (a metal strip inside a plastic cover imbedded in most packaging) is designed to be shrunk with a high energy electric blast which uniquely identifies a stolen article.

Guess what this does to aneurysm clips and metal sutures? That's right, electrocutes brain matter with 19 amps and 50,000 volts. It happened a few months ago and she's paying the price with even more head pain. I suppose this brings new meaning to "buyer beware."

That is so scary. If you would share, what happened at the store? Did she pass out, fall down, or need to be taken to the hospital? I ask because I often shop with my young children and I would hate for something like that to happen in front of them. Numerous times I have had a cashier forget to take off the tag or was near someone that had a tag left on.

Not once during my research did I read about anything like this happening. I just happened to think about all the "what if's", and that is why I asked the doctor about the metal detector in the first place.

Thoughts and prayers for your wife.

She has the same mfg clip as you but the pre-1995 model made of a cobalt alloy. We have always taken steps to avoid this as I would always lead about 10 feet ahead of her before we entered or exited a store with me carrying any packages just in case something would set off the detectors.

As the system was set off, I turned around, saw that the exiting customer and my wife were in the gate simultaneously and watched by wife raise her right hand to her head to signal she just was zapped by the system. Fortunately this was all caught on video monitors and the customer who set off the system returned to the counter so we have a paper trail. While it did not cause her to fall, she did have her head jolted quickly as momentum carried her out of the gate.

She had a subsequent CT scan which doesn't pick up on small nerve or brain matter injury. The rub also is there is no medical specialty dealing with electricity induced injury but present research indicates that it could take up to two years for symptoms to become known. Already, this has affected her daily living activities in that she can no longer prepare meals in the kitchen using any electric devices. There are some many other symptoms as well.

The best source to describe this type of injury would be at Medscape and searching on Electrical Burns. That document should provide enough background of what can happen. Should this occur to you, collect as much evidence as possible, notify the manager of the facility to what occurred, notify your Neurologist and begin the documentation of symptoms.

The increased sensitization due to this is something no one should have to endure and so I can't warn everyone on this forum strong enough that seemingly harmless electronic devices could potentially make your life a nightmare as it has our lives.

I've never heard of such a thing happening! a simple retail anti-theft device?! yes, I knew that the older clips were not made of titanium but other alloys and honestly never had a clue that anything such as you described could even occur---that is scary! I would think that there are numerous other scenario's that need to be avoided for Survivors who received the older clips (All I've ever considered problematic was an MRI--Boy was I wrong)! I would also wager to say that anyone who's received a clipping with the newer technology of the titanium clips---which dates back to 1995 ? --shouldn't have any such disasters to deal with....God willing! Prayers to you and your wife Ed, Peace, Janet

Hi Ed, So sorry for what your wife has had to experience all these years and now having to worry about metal detectors, scanners or whatever else is out there. Keeping up on all the new tech items must be so hard to do. Bless her for having to handle all this but we know you are of big help to her.

I remember a big news story about us older people who have the lead fillings in our teeth and everyone was having them replaced because of the danger. To often what is acceptable today in medicine can be of harm later in years but these metals that are used to help a serious condition are a must and in most cases dangerous to try and replace.

One quick note regarding the titanium clip. Information was told to me that I could get the make and model and serial # by contacting the hospital records department where my surgery was done, not my surgeon. I had to send my request in writing and received it within about 2 weeks. More info that I expected. I did so because there are some MRI machines throughout the world that are to strong for me incase of emergency MRI needed. The way it was explained to me is like a junk car yard using that huge magnet picking up 1 car for loading onto the flatbed. Well the stronger MRI machine can pick up 3 cars at once and that is the machine I have been told NOT to use. I was scheduled for the stronger machine but the nite before the MRI the technian caught the error and called me to rearrange for me to use the weaker MRI machine.

Anyway, I copied this clip information and carry it in my wallet incase I am in an ER room so they know what not to do. Hope this is of help.

Here's simple analogy that helps illustrate what many clipped survivors unknowingly experience. We average (unclipped or uncoiled) people experience a static shock transmitted to a grounded surface after a sufficient electrical charge builds up in us. It is a shocking and not ever pleasant experience. In clipped patients and especially in those that have metal sutures, the electrical charge is continuously discharged into the skull and brain. This is by virtue of the way the sutures are installed. We all experience this shock because the charge has to go somewhere and that is to grounded surfaces. In patients such as my wife, the charge is continually discharged into the brain. The implications of this has so many far reaching effects that I publicly avoid trying to discuss this phenomena unless it is privately with another patient or with medical professionals. Can you imagine the damage this could cause patients in today's relatively uncaring society and in the wrong hands?

Nope...but my coils are platinum...

Please don't let your guard down because you may have either titanium or platinum. Both are alloys containing some ratio of magnetic type metal and therefore are not pure. It lessens but does not eliminate risk of electrical interaction. There is nothing in science that can undo magnetic fields, it holds into the nano measurements. This is why many patients get headaches following implantation. Once one understands that the human brain and nervous system is the most complex and precise receiver/transmitter ever invented by God, it becomes clear that anything placed in the brain will cause it to go slightly to fully haywire as is what occurs during migraines.

Interesting, Ed. I would be interested in more information.

Ed...this is very interesting...and I must say...since coiling I haven't had an MRI...and I haven't had to go through any metal detactors at airport, because my dog always fly's with me...~ Thanks for your information...it forces us to be a bit cautious, which is a good thing ~ Colleen

I do have something to show you and hope to have it by tomorrow this time. I'm still trying to learn where everything is on Windows 8 and can't find a conversion program I need (P.S. Don't buy it, it really sucks).

No, I don't have a card indicating I may set off a metal detector. I am assuming there are various clips being used and depending on which is used, you may or may not receive the Med alert ID card.

OMG!! That's beyond scary! How is she doing? I am wondering if she was warned after the surgery that such a problem can arise. I can't even bring myself to imagine such a insane incident. That's yet another issue in addition to her trying to live after surviving aneurysm.

I'd love to get more info on this as well (And yes, Windows 8 is a 'must not' -- nothing but poor reviews from everyone I know of )

The photo below shows an electrical burn which was incurred without having to actually touch anything with a electrical current. In essence it was created out of thin air using nothing more then a shop wet/dry vacuum hose and a nearby metal object. The electrical charge was created by the air molecules and dust particles being vacuumed. As I held the rubber hose in one hand, the static electrical charge traveled from one arm to my other arm and exiting my wrist which was resting on a smooth wide edge of the metal object. This principle of electricity is called "skin effect" and is capable of occurring in any object which can also conduct a magnetic field. We all are such an object.

Anyway as you can see, this photo illustrates that "skin effect" also can be transferred to even slightly metal objects in our bodies including clips, screws, stents, and glue. The issue I raise is that this electrical charge is also discharged within the human brain because it is not only a perfect ground but it also has it's own electrical charge.

This effect (which I call EMRICH) is what medical science and government regulators have been turning a blind eye to for patients in post aneurysm procedures complaining of head pain. The explanation given to most patients is "its all in your head" or give it some time it will go away - and it never will. 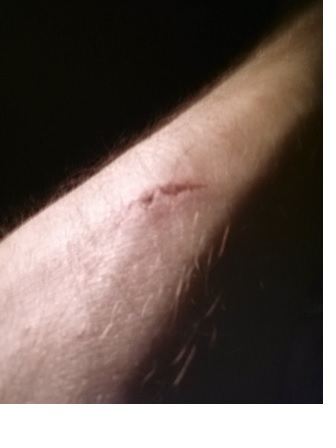