Aneurysms details I was told that perhaps if I put some more information about my aneurysms and that maybe somebody could give me some thoughts.
2018 I was diagnosed with a 2.5 pericollsal wide neck aneurysm. Apparently, it is on the second distal bifurcation on the Azygors Anterior artery. Apparently it’s quite uncommon. They say 4 to 7% of the entire population has one like this.
I had an episode where I had to be taken by ambulance from the casino to the ER because I had this weird thing happen where my eyesight, hearing everything went at once and then I threw up. They called it vertigo. Which it probably was. But when I got my paperwork I saw that it says it was a 3.2 mm aneurysm. Last spring I had an MRI again and it was still 2.5. Within the last nine months it’s gone from 2.5 to 3.2.

My case was presented in front of a multidisciplinary team and the general consensus was they felt it was too risky to do anything about. I’m not quite sure what the word risky means. So I’m supposed to have a phone conversation with my neurosurgeon tomorrow. I am also getting a referral for a second opinion because I would like a little more information. If it’s too risky to treat, does that mean it’s too risky to have in my head?
I find this all a bit unsettling. And how can they tell me that my symptoms don’t have anything to do with my aneurysm? How do they really know? I find it very suspicious that I started having all these problems and then my aneurysm got bigger. Perhaps a coincidence? Who knows? But still unnerving

Unnerving? Well, that’s a nice way to put it. When I finally got a diagnosis and the diagnosis being neuro, ‘unnerving’ is not the word I used, it was shocking to say the least and that line…

…is rather common.
The theory I was given was “We operated. We fixed” and therefore any ongoing issues were not related because ‘We fixed’, only it wasn’t fixed at all and I’ve had weird, (reportedly) unrelated symptoms ever since. dizziness, balance issues, seeing stars etc

I’m not quite sure what the word risky means.

The ‘Circle of Willis’, where the Anterior cerebral artery (ACA) is located is in the centre of the brain. To actually get to it would mean disturbing a fair amount of grey matter around the area, the flow on effects of which could be very risky.

Now, in VERY layman sort of terms here is an image of a normal structure of the anterior cerebral artery (ACA) 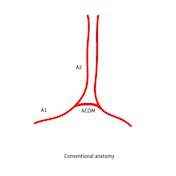 And here is an image of the Azygos anterior cerebral artery 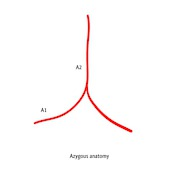 The Anterior Communicating artery (ACOM) helps regulate the blood pressure to the left an right hemispheres of the brain, but as you can see in the azygos variant, the ACOM is not present, this could well account for many of the symptoms you report. The argument of cause vs effect is one that can be never ending. For example is it the azygos anterior cerebral artery that’s causing your symptoms or the annie? Or is the annie the primary issue or is it the azygos issue the primary?

Often in neurology, every neurologist can have a slightly differing view as the ‘answer’ may not be so clear cut as to one or the other, but rather a combination of both. “How do they really know?” In all honesty, they don’t. They take all of the available information and in consultation with their multi-disciplinary team, make an educated guess. I say this from my own situation/experience. I have hydrocephalus or a blockage of the flow of cerebral spinal fluid. Initially, they placed a shunt to drain the fluid, and yes, it did drain the fluid. But my symptoms did not improve, so next they did the craniotomy and went after the growth which was causing the blockage. The problem for me was that the growth was too close to brain structures I need, so could only be partly removed. So although there was a plan, the plan didn’t go to plan. Even with all of the best intentions and planning when it comes to neuro, plans don’t always work.

It will be interesting to hear the views of your neurosurgeon. Please do let us know.

Best of luck with it all
Merl from the Modsupport Team

They took my case to the multi-disciplinary committee there at my hospital and everyone was in a general consensus that it would be too risky to do anything about it so we should just watch and wait. Or wait and watch.
I just wanna know what they mean by too risky? If it’s too risky to fix does that mean it’s too risky to have in my head? And the question being if it is indeed a bit of a anomaly that how can they possibly know what the rupture rate is if only 4percent of the population has it?

I had to look it up, as I don’t remember reading about it. This is what I’ve found folks Azygos anterior cerebral artery | Radiology Reference Article | Radiopaedia.org

I just thought wow, 0.4-1% of the population, jus wow! Then of course since it’s fairly early and one of dogs hasn’t felt well all night so not much sleep and I’ve wondered what population are they talking about, the General world wide population or the cerebral aneurysm population. Either way, it’s a wow! AbbeyCat, see if you or your PCP can find a Neurosurgeon who specializes in AVM’s. Mine does and you can ask for her to look over your images. She may have some different knowledge than the team in your area. If she does, she can share those suggestions with your team I imagine. I’m not sure you want to fly to NC to see her for treatment and then the follow ups

I think when a neurosurgeon says that it is too risky, they mean that attempting an operation is likely to do you serious damage: that you could very well come out of the operation not at all well. Sometimes this is due to the skills of the neurosurgeon and the methods that they use: that doing what they know how to do, the risk of leaving you disabled is too high for them to contemplate operating. A different neurosurgeon who is skilled in a different approach may take a different view on the risk of the operation. Or, it can be that the location of the anomaly makes any intervention likely to do more harm than good.

I’m an arteriovenous malformation patient and we have a separate community of AVM patients within Ben’s Friends. It is quite often that cerebellum AVM patients are given the very difficult news that to operate is just too dangerous thing to do; to watch and wait until surgery is absolutely vital can sometimes be the only sensible choice; that you’ll get a longer, more successful life by leaving it be. Perhaps. Clearly this is not what any of us want to hear.

Definitely take views from other neurosurgeons!

I’ve merged the two threads into one.

I concur with @DickD that “too risky” is what might happen when you are on the table. The high risks for any angiogram begin with the anesthesia and the list just gets bigger with the contrast dye and the procedure itself. Members should really know and understand all the risks. How does one make an educated choice when the doctors don’t give us all the information to be educated? I’ve had some Residents try to minimize them which isn’t helpful at all. My Neurosurgeon loves it when I correct them

I have had numerous angiograms and each one was harder on me. I am now at the point that the only way my Neurosurgeon will do one is to save my life. Luckily the stent she installed seems to be doing the job intended. That being said, I would suggest you contact the Doctor who is working with you via your portal and ask “What does too risky actually mean?” This way you will know what the team has determined the too risky to mean If that makes sense.

I know that I’m gonna be told that none of my symptoms have anything to do with either the artery or my aneurysm. But how can anybody be 100% sure? They can’t be. Things are just connected in the body in a strange way. But I’m going to go see him in a couple hours and I will pop back in and let y’all know

My doctor explained to me that there is a risk ratio of chances of the Annie erupting vs. risk of consequences during surgery. I was diagnosed with my Annie and waited ten years prior to the surgery. It grew during that time but it was the size they were monitoring with an annual MRI. Once it reached a “5” they felt the odds were better for surviving surgery over an eruption do that’s when the surgery occurred. I hope this helps clarify. Be safe.

Did they coil it or clip it? I found mine in 2018. So it’s been floating around for four years. In that time it has grown. It’s about a 3.5 right now which he said is kind of borderline because usually around four or five is when they start doing things. But I’m going in for an angiogram on the 15th so we’ll see what that does.