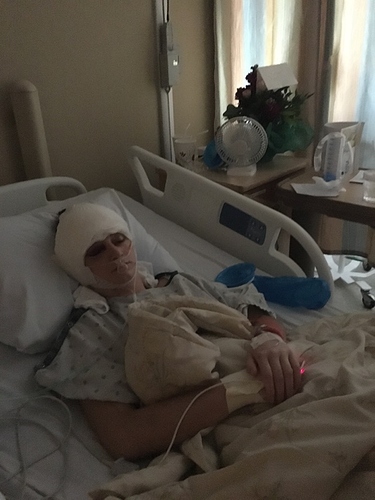 My name is Maura and I am a 24-year-old young lady. This blog is what provided me with the most honest and useful information throughout my experience last year, so I want to pay it forward and provide my story for those who are going through the same thing. I was 23 at the time of these events and also had Crohn’s disease, Raynaud’s, Rheumatoid Arthritis (RA).

When I was 6, a fall and hit to the head led me to the ER for a CT scan. That is when my first aneurysm was discovered, incidentally. It is on the left side of my brain on the carotid artery, right next to the optic nerve. It’s sitting at about 3mm and is stable. Surgery in 1999 was far more dangerous than my risk of rupture, so the plan was to monitor at least once a year for the rest of my life and only intervene if anything ever changed.

-2016-
I was in college and doing my best to ignore any and all health problems (ignorance, I tell you). It had been 2 years since my last routine scan when the bloody noses started in fall 2016. I bled every single day for hours and hours out of my right nostril, only. I couldn’t touch my face, bathe or look down without blood escaping my nose. After several months of trying different “dry air” remedies, I was convinced by a friend in the medical profession to get my butt to the doctor. This appointment was in Spring 2017. My general doctor said he didn’t think these bloody noses had anything to do with my brain, BUT I was overdue for a scan. I was referred to a new neurologist nearby and in a MRI machine before I knew it. (I have not had a bloody nose since that scan. Weird, I know.)
I received the call shortly after. If you’re on this blog, you probably know by now that physicians don’t tend to spend their evenings calling patients to discuss good results. He told me what I had expected…that my original left aneurysm had grown to about 5mm or so, but the reason he had called so late is because there was a new aneurysm on the right side of my brain. It was an internal carotid-ophthalmic aneurysm at 8mm. He told me he was alarmed because the shape was very irregular, having a sharp point at the top and it had grown very quickly being that it was nonexistent 2 years ago. He explained that MRA images are only so accurate and there was a chance the image was faulty. I was told to immediately quit physical activity, refrain from taking up smoking (hard pass) and remain calm as an elevated blood pressure could be dangerous. We scheduled a cerebral angiogram to confirm his finding. I hung up the phone, took a shot of Jameson and went shoe shopping.

One thing I want to share about the angiogram is that I was 100% awake for the procedure and was not aware that I would be until the day-of. If you have any questions about cerebral angiograms, I’d be happy to share my experience with you. My results were shared in post-op. Unfortunately, the MRA images were correct and I did have a big, bad and scary aneurysm. I was referred to a neurosurgeon in Minneapolis that is an expert when it comes to irregular, hard to- get-to aneurysms. I met with the surgeon to discuss my only option (craniotomy), the seriousness of my situation, risks, step-by-step details of surgery and all my “what if’s” were answered. June 21 was soon marked on everyone’s calendars and our September wedding was postponed to a later date.

-June 21-
I completed the hibiclens shower the night before and another the morning-of. My parents, brother, and fiance came with me to the hospital. I was taken away from my family to complete some pre-op stuff such as a UA, lab draw, and start an IV. I was placed in a heated Snuggie looking-thing to keep me calm as well as regulate my body temperature during surgery. My head was marked, I met all the top people that would be in the OR, handed over my Advance Directive, and it was go time. Saying goodbye to my family was by far the hardest part of this entire story. No physical pain will ever compare to what that feels like.

The anesthesiologist screwed a vial of medication onto my IV and told me that I was in control…give myself as much as I want. I said, “If I am in control, can I decline? I want to see the OR, introduce myself, and remember their faces.” He told me that was pretty unusual…but sure. There were easily a dozen people still preparing when I arrived. Blood was being stocked in the fridge, tools and machines moved around, and lots of staring. After laying down, my chest was marked for a PIC line, breathing and foley tubes were measured, an additional IV was started, and one last comment on the risks, “stroke, blindness, losing your artery, blood loss, and death”. Got it. I told the interns to learn something and wished them good luck.

The next memory I have is for 2 weeks later back at my parent’s home in Nebraska. The following details were told to me by my family.

Surgery was supposed to take 6 hours. I still can’t imagine my family’s fear when that hour had came and passed without any status change on the “Operation Status” board. It took 4 clipping attempts to get it right. Every time the clip was placed, it cut off too much blood flow, preventing blood from reaching the other side of my brain. Due to it’s location and unsuccessful attempts, my surgeon had to mess with my eye more than he had hoped, meaning there was a good chance I could be blind. Surgery was successful and I did not lose much blood. YAY!

I was in the Neuro ICU for a day with the breathing tubes and such. After I was breathing on my own, the tubes were removed and I began to wake up. “I did it! I kicked it’s ass!”- first words upon waking up. Apparently my humor stayed in tact! I slept for a week, opening my eyes enough to say that I could see light. I wasn’t blind! I did a lot of vomiting, whimpering and groaning and my eye/face was extremely swollen and black & blue. My foley and PIC was removed and life seemed pretty amazing to everyone despite how brutal I looked. I was discharged after a week and went to my parent’s home in Nebraska to recover for the summer.

My first memory I have after telling the surgeon “good luck” is being helped to the bathroom by my mom and dad. The pain was unbearable. Any noise AT ALL or light of any sort shot extra pain right through my skull. I hadn’t eaten in days and the only thing I could handle was jello. The swelling was going down and my black eye was resolving slowly. I was not able to sit up, stand, walk, use the toilet, bathe, or do ANYTHING on my own. My memory is hazy, but when I became more conscious, I realized my nose had been super runny for days. When I was sat up, I could hear water swooshing around in my head. It was the craziest thing. Eventually I had my dad come listen to see if he could hear it as well and he did. We called the nurse post-op line and waited for a call back.

That night I woke up in the middle of the night feeling like the ceiling had just fallen on my head, literally. This pain was the most agonizing pain in the world. I couldn’t speak or see well, but was able to grab my phone and dial my dad’s number who was in the other room. I threw the phone down and waited. I was taken to the closest ER at a small hospital and thrown in the CT scan. While waiting for the result, I started to feel very strange…I knew something bad was going to happen. I turned my head to tell my parents that this was really bad and something isn’t right, but the words didn’t come out. Although I don’t remember these details, I had an atonic seizure and was transported by ambulance to a larger hospital with a neurosurgeon ready to go. When I woke up, I was told I had Hydrocephalus and a Cerebral Spinal Fluid (CSF) leak and that if I so much as lifted my head, I would die. There was a hole in my skull from the craniotomy and I had been leaking brain fluid out my nose for weeks. My brain was sinking. A lumbar drain was placed in my spine and I laid completely 100% flat (not even a darn pillow) for 10 days. On day 3, I had my second surgery to patch this CSF leak. They took fat from my stomach and patched a hole in my skull that was behind my pituitary gland. The surgery is 50% effective and time would tell if it was successful. This time period was the hardest mentally and emotionally by far. I can honestly say this is the only time in my life I ever felt truly depressed and defeated. If I didn’t have my family, friends, and husband-to-be to lift me up and keep me positive, I’m certain I wouldn’t have made it out of that hospital. I had to continue to lay flat with the lumbar drain for over a week while fighting a high fever and infection. Bed pans and eating while laying flat is a challenge, let me tell you! I lost a total of 32lbs during my entire experience leaving me at 89lbs when I finally returned home. They declared my surgery a success and I was released.

I spent the next 2 months recovering. Light and sound sensitivity improved a lot, but is still sensitive to this day. I was put on Keppra for seizures, steroids, antibiotics, pain medication, and a number of stomach medications. I revisited the ER several times and had one more hospital stay for irregular heart rhythms and infections. I moved back to South Dakota in the arms of my beloved fiance 3 months later and returned to work at that time for a few hours a week. I have experienced a few focal on-set seizures and have headaches almost every day. My incision mark is indented but not very noticeable unless you look for it. My short-term memory is still a little off, but I can’t complain. I was diagnosed with Lupus a few weeks ago and have began treatment for that. My next MRA is in August and I am hopeful for good results. The left, original aneurysm is still hanging out, cooperating for me! We were able to set a new wedding day for April 28 and are enjoying the newlywed life.

Often times, we go through something scary then look back on our experience thinking it wasn’t THAT bad. This is not one of those times. I get emotional every time I think about what happened last year. It was hard. It was SO hard… and painful… and scary and I never want to do it again. For those of you that have done this repeatedly, I can’t imagine. You’re all rockstars, warriors, brave…thank you, strangers, for helping me through the most dramatic and scary thing I have ever and will ever go through. 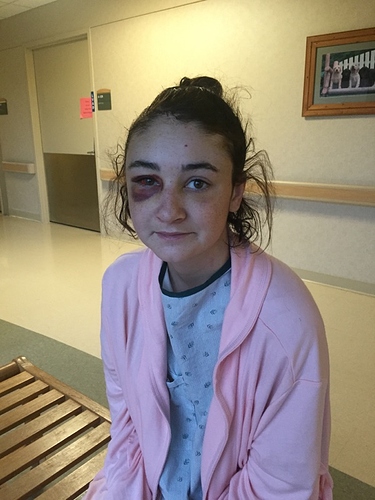 Wow what an absolutely amazing and inspiring story! So glad you are doing well. God Bless

Maura , thank you for sharing your story … I hope you feel better and better now, and all this hard experience will be now only in the past !